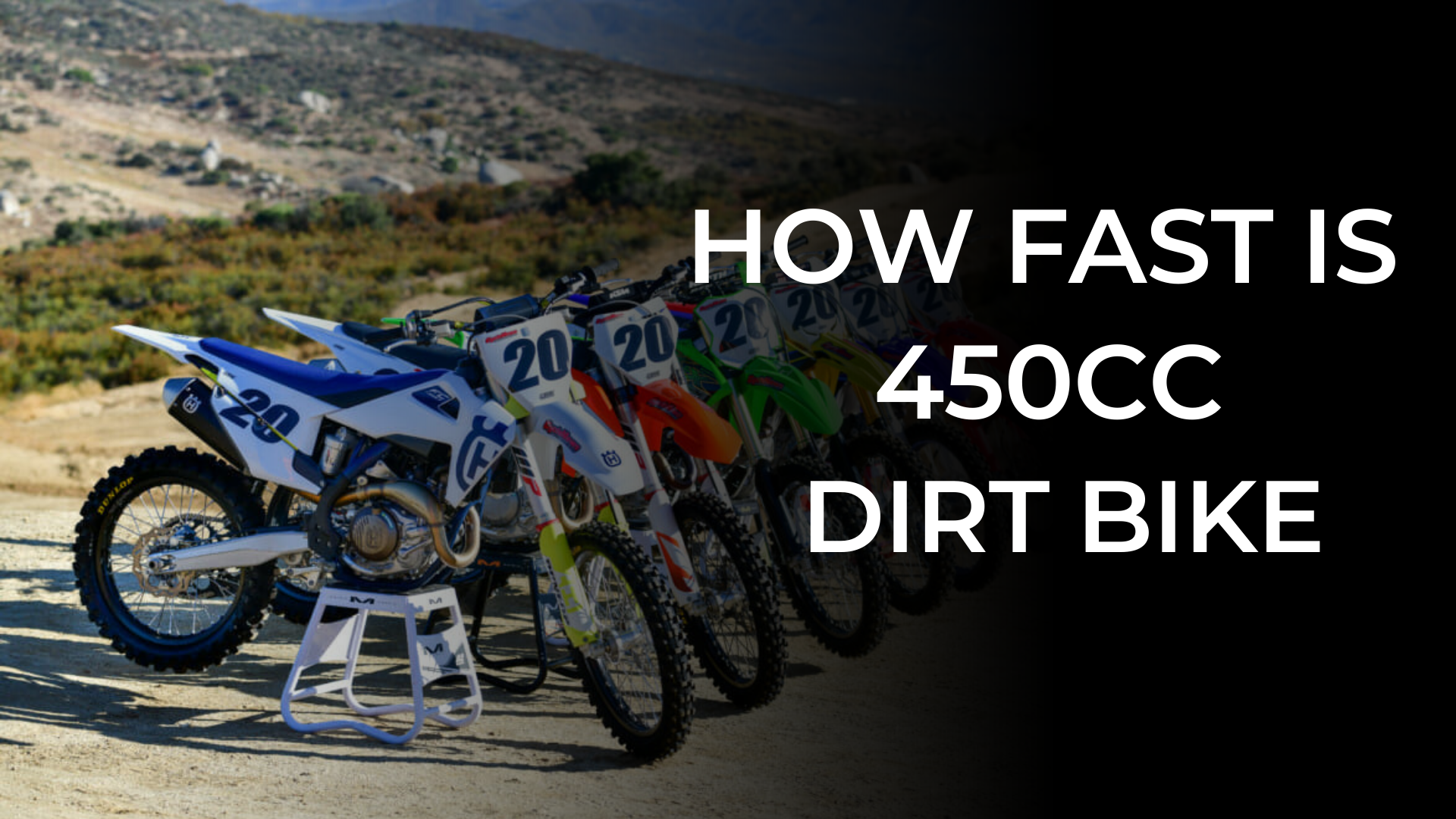 A dirt bike gives you the feeling of thrill and adventure, which a normal bike can not. A dirt bike is destined for rough, bumpy, dusty roads. They are often used for off-roading and adventure sports. With changing Times, dirt bikes have changed significantly from looks to technology and performance.

So how fast is a 450cc dirt bike actually?

Technically, the top speed of a 450cc dirt bike can vary from anywhere between 75-110mph. The difference is caused due to the engine, the brand, rider’s height and weight, and even the type of terrain where the ride is being placed.

Like everything, there are exceptions in 450cc dirt bikes too as there are few low-end ones whose top speed is even below 75mph.

Factors Influencing the speed of a 450cc Dirt Bike

There are various reasons which can influence the speed of your dirt bike. Some of them are listed below for you:

One of the main reasons that affect the speed of a dirt bike is the engine type. Dirt bikes have two types of engines, i.e., two-stroke and four-stroke engines.

A four-stroke Dirt bike has four strokes( up and down movement of the piston in the engine) involved in the movement of the engine. The four main steps are intake, compression, combustion, and exhaust. A four-stroke Dirt bike gives manageable power output, requires less shifting, and is easy to ride; however, they are heavy and costly maintenance.

Weight of the dirt bike

The weight of the bike affects its Speed directly. It takes more power to speed up heavier bikes, and the energy spent on the weight could be used to speed up in a light-weighted dirt bike. Factors like the weight of the tires also affect the speed. One can reduce the tire weight by avoiding adding tire slime or mousse to the tires. (it can increase risks)

Wind drag is aerodynamic, something. Most people do not pay attention. But it affects the speed of your bike. A headwind can reduce your bike’s speed, while a tailwind can help you accelerate. At the same time, side winds do not have much effect on the bike’s speed.

A large sprocket leads to more acceleration and lesser speed.  Using a small sprocket reduces the ratio, called tall gearing, and results in more speed for the engine, while a large sprocket has the opposite effect.

The height and weight of the rider

The height and weight of the rider are also important factors that affect the bike’s speed. If the rider weighs more, it increases the bike weight and requires more power to maintain high speed. While if the rider is taller, the body requires more push through the air leading to a reduced speed.

Speed is a factor that depends not only on the bike body or external physical factors but also on how skillful and Experienced the rider is important. If the rider cannot handle the bike well, the bike cannot give the best output. Also, the rider mustn’t be scared but ride the Dirt bike confidently.

The Speed of a dirt bike also depends upon the type of track. A dirt bike is used on different track types, natural or artificial. Muddy, rocky, rough, and bumpy have different effects on the bike’s speed. Some of the types of track layouts are explained below:

Dirty or muddy tracks are classic routes for Dirt bikers. The best part about muddy tracks is that they don’t develop potholes quickly and surprisingly need very little maintenance.

This type of track is mostly preferred during Dirt bike racing. They make biking more exciting and thrilling.

The KTM 450 SX-F is one of the fastest dirt bikes among the 450cc category. It has a top speed of 123 mph. The bike has a Steel central double-cradle frame. It has a liquid-cooled single-cylinder four-stroke engine.

The Honda CRF450R offers a maximum speed of 142km/h. The bike is Fully transistorized and has a Push-button electric starter. It has a 449.7cc liquid-cooled 10º single-cylinder four-stroke engine. The front suspension is 49mm fully with adjustable leading, axle inverted, and telescopic Showa coil.

At the same time, the rear suspension has a Pro-Link system and a fully adjustable Showa single shock. The bike weighs 244 lbs with a seat height of 38.0 in. It has a fuel capacity of 1.7gal.

The front suspension is a 48 mm, adjustable compression, and rebound with TFX technology. And the rear suspension has Sachs shock with w/adjustable rebound and hi/low-speed compression. The bike weighs 108 kg with a seat height of 36.8 in.

The Honda CRF450X has a 49cc liquid-cooled single-cylinder four-stroke engine and offers a maximum speed of 90 mph. The Front Suspension is a 49mm leading-axle inverted telescopic Showa coil-spring fork with rebound and compression damping adjustability and 12.0 inches of travel.

The rear suspension is a Pro-Link Showa single shock with adjustable spring preload, rebound, compression damping adjustability, and 11.8 inches of travel. The front brake is a single 260mm disc with a twin-piston caliper, while the rear is a single 240mm disc. The seat height is 37.9 inches, and the bike weighs 275 pounds.

The bike has a TypeLiquid-cooled, 4-stroke engine. The front suspension is 49 mm inverted telescopic fork with adjustable compression and rebound damping.

The rear suspension is New Uni Trak with adjustable dual-range (high/low-speed) compression damping, adjustable rebound damping, and adjustable preload. The fuel capacity of the engine is 6.2 L.  The bike weighs 110.2 kg with a saddle height of  955 mm.

The HUSQVARNA FC450 is an excellent Dirt bike with amazing Control. It has a 450cc, SOHC, liquid-cooled, single-cylinder four-stroke engine. It has a Steel central double-cradle frame. The front suspension has a 48mm WP Xact fork, air pressure, compression damping, and rebound damping adjustable with 11.8 in. travel.

The rear suspension has WP Xact shock, spring preload, high-/low-speed compression damping, and rebound damping adjustable with 11.8 in. travel. The bike weighs 223 lb with a fuel capacity of 1.9 gals and 37.0 in. seat height.

It has a fuel capacity of 2.2 gals. The seat height is 37.6 in with a wet weight of 254 lb. Some of the top features of the bike are the High-Performance Four-Stroke Engine, Yamaha Power Tuner App, Adjustable Engine Mapping, Bilateral Aluminum Frame, High-Performance Braking System, and an Electric Starter System.

The Suzuki RM-Z450 is popular for its Corners well and comfortable ergonomics. It’s an easy-to-ride 450cc dirt bike. It has a Liquid-cooled, DOHC single-cylinder engine. A 49mm fully adjustable front suspension with 12.0-in. travel.

And a Fully adjustable rear suspension 12.3-in. travel. The bike has a seat height of 37.8 in and a fuel capacity of 1.7 gals. The bike also comes with an Anti-Lock Braking System. It has 5 Speed gears And electronic ignition.

The bike has a 450cc, SOHC, liquid-cooled, single-cylinder four-stroke engine. The front suspension is a 48mm WP Xact fork with air pressure, compression damping, and rebound damping adjustable and  12.2 in. travel. And a WP Xact shock, fully adjustable rear suspension with 11.8 in. travel. The front brake is a  Brembo 2-piston caliper, 260mm disc.

What factors affect the speed of a dirt bike?

There are many different types of physical, environmental, and mental factors which affect the speed of a dirt bike, like the engine of the dirt bike ( 2 strokes or 4 strokes), Weight of the bike, wind drag, rear sprocket, height, and weight of the rider, the experience, and skills of the rider and the type of motocross track layouts.

Does riding a dirt bike require a license?

At what age can a kid ride a dirt bike?

A kid as small as a 3-year-old can be introduced to an electric dirt bike. You can start training a kid with a 50cc Dirt bike at the age of 4 and remove the training wheels after practice and improvement.

What are the pros and cons of a  2 stroke Dirt bike?

Pros:
1. Due to their simple design and simple work, they are lightweight and easy to handle.
2. Because of a not so complex mechanism used in a 2 stroke Dirt bike, they are cheaper
Cons:
1. Although they have a simple design, they need maintenance regularly.
2. They cause a lot of pollution in the environment.

What are the pros and cons of a 4 stroke dirt bike?

Pros:
1. A four-stroke engine is easier to ride as they are more stable and are not so Jumpy as a two-stroke dirt bike.
2. It does not emit much smoke as there is no oil mixed with the fuel and air mixture. Hence gives a manageable power output.
Cons:
1. They are heavy, and everyone can’t handle a heavy Dirt bike.
2. They do not require maintenance very often, but it’s  expensive as it needs professional assistance during maintenance or repair